This year’s round of Safety Officer drills focused on hazards associated with Hybrid Electric Vehicles, Solar Panels and Hazardous Material identification and releases.  Health and Safety Officer, Captain Bob Telless, has worked very hard to make the drill for each Company as realistic as possible, which included a classroom portion followed up by three realistic, hands on scenarios over at our Training Facility.  The first scenario has firefighters identify a building that is placarded, has available MSDS sheets and is possibly on fire.  Responding Firefighters had to figure out what chemicals are inside the building and what precautions to take.  They had to answer a series of predetermined questions once the chemicals were identified   The second scenario included a pile of Hazardous Material drums that were on fire and leaking.  Firefighters again had to work at a safe distance, utilizing their ERG Guidebooks to try and identify the chemicals involved and decide if an evacuation zone needed to be established.  The final scenario was a simulated fuel tank leak on a motor vehicle.  Firefighters had to use equipment off of Rescue 1 to either secure the leak or dam, dike and divert the leaking fluids to a safe location.  All scenarios were well thought out, being very hands on, getting firefighters to think of situations they might very well encounter here in Carver.  (Photo’s by Deputy Eric Germaine) 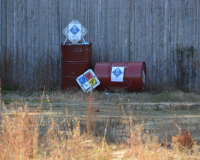 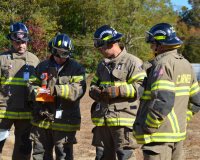 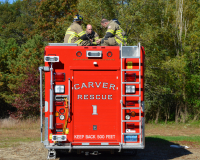 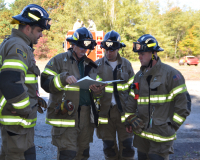 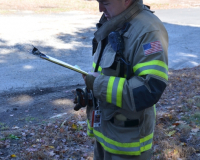 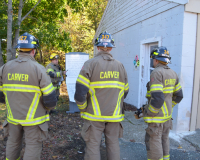