During the winter storm, Company’s 1 and 2 with Engines 1, 2 and Rescue 1, were toned out to a reported Chimney Fire off of North Main Street in our North Carver District.  First on scene, Lieutenant McDermott on Engine 2, reported a long unplowed drive way with Engine 2 attempting to make access.  Captain Bill Froehlich assumed Command ordering the response of Tanker 1 to the scene and the DPW to help plow the driveway for better access.  Crews managed to work on the snow filled roof to extinguish the fire with no extension to the walls of the home.  Some heads up decisions, combined with a quick response kept the fire contained resulting in no damage to the home.  (Photo’s by Firefighter Joe Kirk) 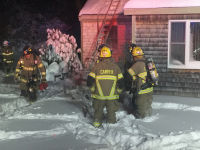 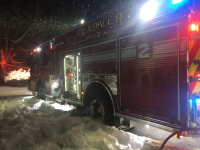 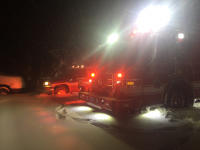