At 10:22 am, Company’s 1, 2 and 3 were dispatched to a reported Structure Fire in the area of 40 Pond Street.  The homeowner reported smoke and flames possibly on the  exterior of the house.  Three firefighters, who were working across the street, were on scene in under three minutes knocking the down the majority of the exterior fire, before the first fire apparatus arrived.  The first arriving Engine Company (Engine 1) arrived at 10:28 and assisted with hose lines, thermal imaging cameras and hand tools, keeping the fire contained to the exterior.  Firefighters had to carefully remove the exterior siding and insulation, keeping the home as intact as possible, to confirm the fire did not extend into the structure.  Crews from Engine 3 and Rescue 1, assisted with extra manpower at the scene, while crews from Engine 2, Breaker 28 and Tanker 1, covered central station, protecting the town, in case of another fire call.

The good news was that the homeowners were able to move right back into the home once firefighters cleared up the debris and vented the house residual smoke.  Great, great job by Firefighters John Woods, Gerard Terrill and Lieutenant Chris Vincent who arrived on scene prior to first fire apparatus, went immediately to work and definitely saved the home!  The cause of the fire was determined to be accidental. (Photo’s by 20 Retired, Chief Dana Harriman, and 111 Retired, Gary Weston) 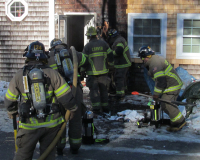 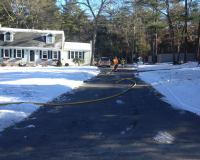 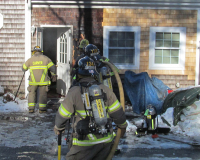 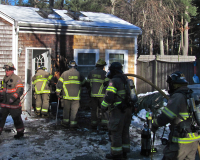 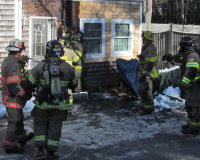 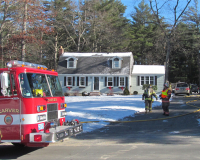 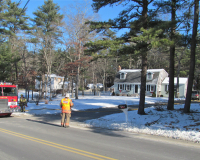 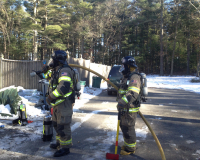