Company’s 1 and 3 were dispatched to a vehicle fire in the Federal Road (Landfill) area of South Carver.  Engines 1, Engine 3 and Car 3 were directed into a very remote clearing, finding a large logging feller buncher that was on fire. Prior to notifying the Fire Department, onsite work crews dumped about 10 yards of dirt on top of the excavator to try and smother the flames.  This action hampered firefighters efforts as the sand had to be removed with hose lines in order to access the hidden fires in the engine compartment.  This was a muddy messy fire with crews being onscene for about an hour while Engine 2 covered our central station.  Fire crews spent another 2 hours back at the station cleaning hose lines and air paks of mud and sand.  If you notice in the pictures above, they even let me squirt water for a while.  The Mass DEP was notified as approximately 30 gallons of fluids leaked from the machine prior to the Fire Departments arrival. (Photo’s by Deputy Eric Germaine) 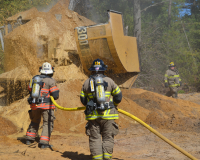 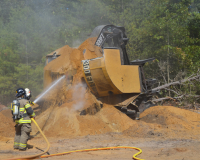