Fire Company’s 1 and 3 (Engine 3, Engine 1, Brush Breaker 28 Rescue 1 and Car 1) were dispatched to an MVA on Federal Road (South Carver) with reported multiple people trapped inside the vehicle. Fire Lieutenant Chris Vincent responded directly to the scene, taking Command and reporting that one person was trapped with other occupants still inside the vehicle.  Firefighters from Engine 3 (first Engine Company on scene) immediately went to work stabilizing the incident and using thier portable Jaws of Life tool to start and gain entry to the trapped patients. While Firefighters were using all their skills to gain entry to the twisted vehicle, Carver EMS provided patient care inside the vehicle, while Carver Police assisted with patients and kept the very narrow curved roadway clear for arriving fire apparatus and additional ambulances. Firefighters from Rescue 1 set up additional Jaws of Life tools in preparation for an extended extraction. Carver Engine 1 and Brush Breaker 28, under the Command of Captain Matt Sears, established a MedFlight landing zone (LZ #13) at Ocean Spray off of Federal Road. With only a short eta, MedFlight landed and transported the most severely injured patient to a Boston Hospital, while others patients were transported via ambulance to neighboring hospitals. Carver Engine 2 was called up from North Carver to cover Central Station while the incident was ongoing. Overall, all patients were quickly extricated, with Carver Fire, Police and EMS working together to give everyone the best chance for survival. A big thanks to Carver Police for keeping the roads open, as a lot of fire apparatus and ambulances were needed and utilized at the scene. (Photo’s by Tyler and Rob Reardon, All Companies Working) 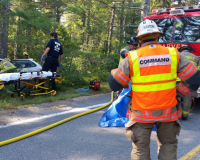 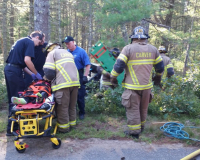 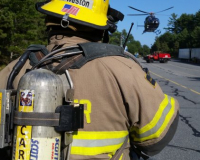 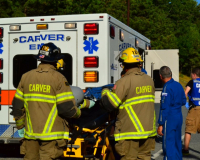 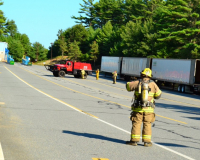 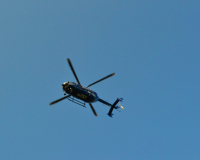 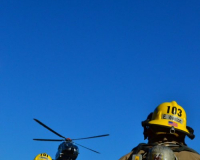