Firefighters from Company’s 1 and 3, utilizing Engine 1 and 3, Rescue 1, Breaker 28 and Car 1 responded to an MVA with at least one person trapped in a motor vehicle.  Captain Matt Sears was first on scene reporting one person trapped with a total of three people injured.  While Firefighters prepared to work with the Jaws of Life, additional ambulances and a Med Flight Helicopter was requested by Carver EMS.  Carver Police closed the roadway down and assisted our First Responders.  Firefighters used all the cutters, spreaders and rams off of our Heavy Rescue to free the trapped person.  Due to the extent of the entrapment, it was determined that this would be an extended extrication.  Carver EMS worked quickly to try and stabilize the patient, while Firefighters removed the vehicles roof, front and rear drivers side doors and dislodged the driver’s seat in order to get enough room to free the driver.  Once the driver was freed and in EMS care, a Med Flight landing zone was established at our LZ #4 (Carver Elementary School) under the Command of Captain Bob Telless.  Firefighters from Company 2, using Engine 2 and Breaker 28, secured the landing zone and helped Carver EMS load the patient who was then flown to a Boston Hospital.  We hope and pray that the driver will be ok, as all emergency personnel used all their skills and tools to provide the best care possible.  (Photo’s by Rob Reardon, All Companies Working) 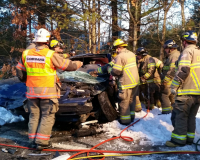 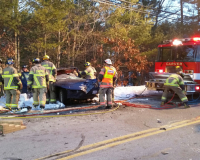 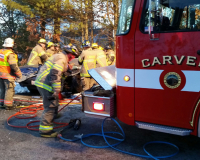 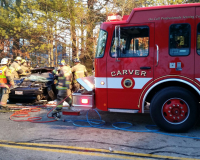 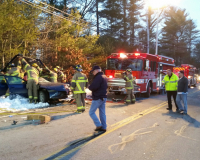 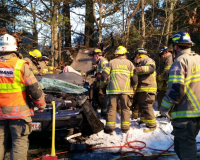 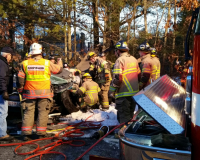 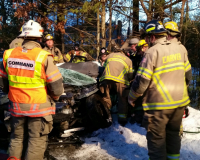