On Tuesday, September 8, the Carver Select Board, Police Chief Marc Duphily, Fire Chief Craig Weston, CFD and CPD Honor Guards, Emergency Personnel and members of the public gathered at the towns gazebo to recognize the heroic effort of Firefighters, Police Officers and a Public Safety Dispatcher that worked together to rescue a women trapped in a recent house fire.

The story of the events are below:

On Sunday, July 19, 2020, at 8:26pm, our Public Safety personnel responded to a structure fire where a woman was trapped by fire on the second floor of her home.  Being honor for their heroic actions are Firefighters Chris Mahoney, Todd Sexton, Kam Murphy, Matt Barrington, John Lovendale and Police Officers Glenn Gillan, David Heikkila and Public Safety Dispatcher Peter Leopardi.  Each of these Public Safety Professionals worked together, ultimately saving a person’s life.

Public Safety Dispatcher, Peter Leopardi, received a frantic call from a woman saying that her house was on fire and that she was trapped on the second floor.  While trying to keep the woman calm, Dispatcher Leopardi toned out Carver Fire, Carver Police and Carver EMS to respond.  While Firefighters assigned to each of our three fire stations were responding to the fire incident, these five Firefighters and two Police Officers responded directly to the fire emergency.  As per Carver Fire Response Guidelines, a Firefighter that lives within a ½ mile of a fire incident will respond directly to that incident, while other Firefighters respond to their respective station to respond with appropriate fire apparatus.  This policy ensures that one or more Firefighters that live close to the emergency can arrive quickly and start to assist and mitigate the incident.

As each arrived, they heard and witnessed a woman screaming from a second story window with heavy fire conditions exiting the windows on the floor below and thick black smoke pushing from the window above her head.  Firefighter’s utilized a ladder borrowed from a neighbor’s house to reach the window where the woman was in obvious distress.  A neighbor had already attempted to reach the women, but was unsuccessful as the smoke and heat pushed him back.  Firefighter Chris Mahoney, who was first to arrive on scene, made two separate attempts to climb the ladder and try to convince the woman that she needed to exit immediately.  Firefighters and Police Officers below helped to steady the ladder and then reposition it for a second attempt at the rescue.

While this was going on, Public Safety Dispatcher Peter Leopardi managed to keep the woman on the phone, constantly reassuring her that help was on the way and that she would be ok.  Peter did a great job trying to keep her calm and telling her that she needed to try and get out the window herself.  The woman was obviously very scared.  In the meantime, the fire had progressed up the stairwell from below and had blocked her exit from the bedroom.  Police Officers Dave Heikkila and Glenn Gillan worked to open a rear slider door to try and make entry to reach the woman inside, however the fire and smoke was too intense.  Upon opening the sliding door, a trapped dog was found in distress and immediately rescued.  One Firefighter grabbed a garden hose and tried to protect the rescuing Firefighters from the high heat and flames now escaping the window next to the ladder.  A six-person fire attack crew from Engine 2 now arrived on scene, with orders to make entry into the main fire room and try to reach the second floor to assist in the ongoing rescue.

On Firefighter Chris Mahoney’s second attempt up the ladder, he was able to get a good hold of the trapped woman and forcibly pull her onto the tip of the ladder, head first.  In one motion, the woman and Firefighter Mahoney descended down the ladder where Firefighters below were able too slow their fall and grab the woman.  From there, these Firefighters and Police Officers moved the occupant away from the building and into Carver EMS care.  Firefighters were able to extinguish the fire on the first floor and rescue a cat that was trapped between a first and second floor void space.  The cat, which was suffering severe heat and smoke inhalation, was given oxygen via a pet friendly O2 mask carried in our command cars, and eventfully recovered.

We received word later that evening that rescued women was doing well and talking with her family while at the hospital.  She has since recovered, is back home with her family!

There is no question, that if Firefighters, Police Officers and EMS personnel did not work together, a life might have been lost.

It is not often that we recognize our own for unselfish and lifesaving efforts.  This is because there are numerous times that our Firefighters, Police Officers and EMS personal go above and beyond saving lives and protecting our residents. This rescue would not have been possible if it wasn’t for Public Safety function as a united TEAM.  You should feel deep pride and satisfaction for as a Public Safety Team, 54 Carver Firefighters utilizing 15 pieces of apparatus, 2 Police Officers and 2 Ambulance crews immediately responded to the structure fire.  We estimate that five Firefighters and two Police Officers were on scene within 2 ½ minutes, Chief Fire Officers within 3 ½ minutes and Engine 2 with a full crew of Firefighters within 5 minutes.

Firefighter Chris Mahoney received a Medal of Valor Award for his unselfish and heroic actions in making two attempts to remove the trapped women from the second floor. (Photo’ s by Retried Firefighter, Rick Leopardi) 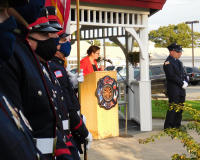 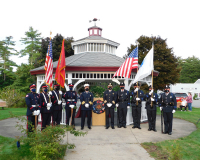 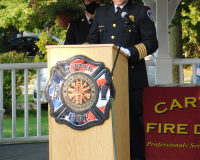 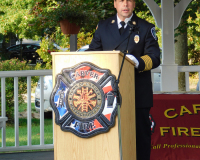 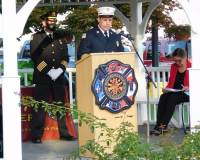 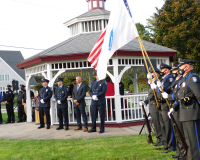 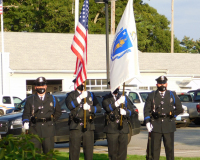 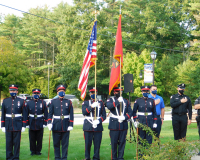 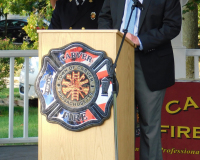 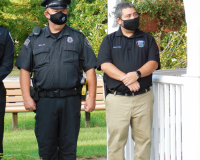 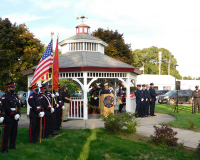 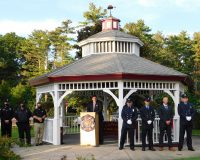 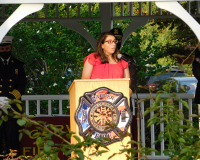 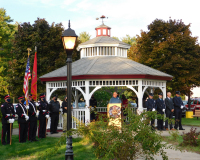 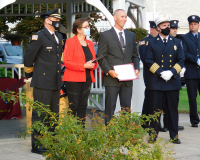 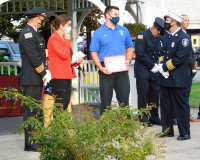 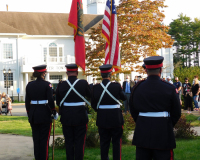 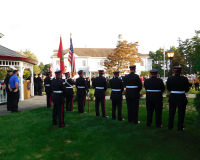 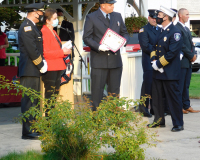 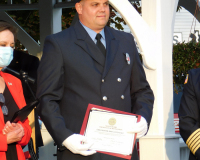 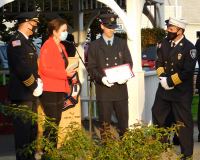 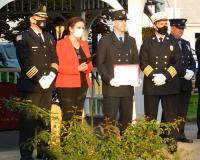 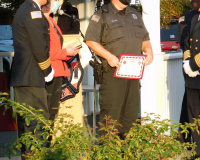 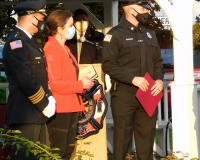 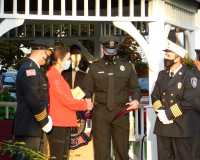 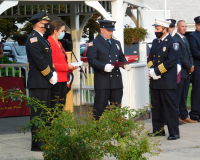 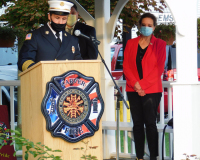 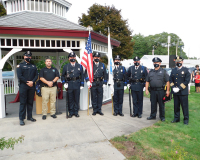