Carver’s Public Safety Departments were notified of a lost person, possibly lost for over two hours before being reported, somewhere in the woods of South Meadow Road and Main Street area.  A unified Command Post was establish with Fire, Police and EMS outside the residence on Bisbee Drive.  Throughout the incident, our Public Safety Dispatch Center worked with Verizon in gathering cell phone ping locations to assist the Command Post in coordinating a general search area.  The State Police Air Wing was requested with an eta from Westover, MA.  Fire Company’s 1 and 3, consisting of 30 Firefighters utilizing Brush Breakers 26, 27 and 28, Rescue 1, Rescue 2, Forestry 25, Command Cars 1, 2 and 3, a Carver Ambulance and three Police units were dispatched to the Command Post and given orders on specific areas to begin searching.  In the initial stages of the search, the Command Post did have communications with the lost party via cell phone, but his cell phone battery was almost dead.  The lost individual was instructed to start a small fire for warmth and to allow first responders and the air wing to locate him more quickly.  His cell phone then went dead and all communications stopped.
Once the air wing arrived on scene, they quickly located the lost individuals fire in the middle of the Hemlock Island Swamp using their thermal imaging system.  Exact GPS coordinates on the location of the lost person were relayed to the Command Post, where fire personnel used mapping software to show exactly where the person was on computer screens.  This information, combined with our vehicle tracking software allowed us to coordinate and stage a fire rescue and search team and needed assets as close to the individual as possible.  Once our search team was in place, the State Police Helicopter guided them on the half mile trek through extremely thick brush, briers and swamp.  With their assistance, Firefighters located the lost individual and were able to guide him out of the woods.  The State Rehab Unit was deployed on scene to rehab our search team, as they were exhausted from the grueling conditions.  The incident took over four hours to complete, but the individual was returned home safely and there were no injuries to any of our Firefighters.  Great Job Team! (Photo’s by Firefighter Mike Shaw) 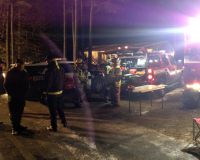 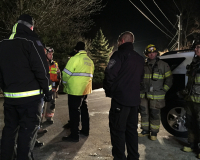 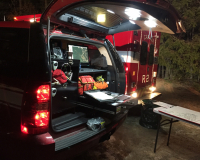 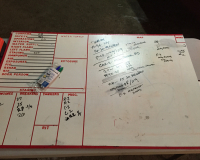 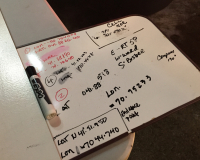 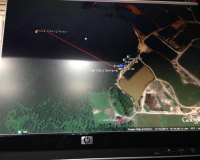 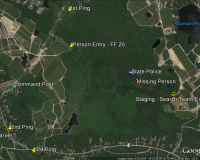 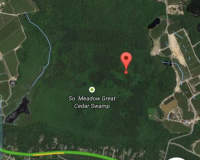 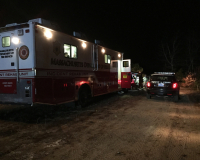 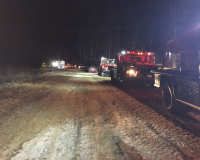 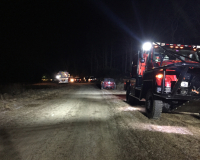 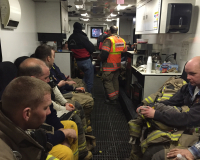 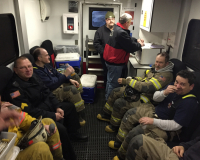 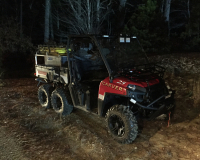 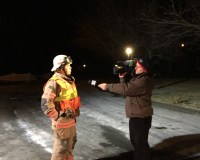